REDSEA Gallery will be welcoming Brisbane artist Luke Barker from October the 14th for his exhibition ‘Street Front’s and Back Alley’s – Brisbane to Melbourne’. Ahead of the launch, we were able to steal 2 minutes out of Luke’s busy schedule to bring you some insight on the fascination with high density urban settings. 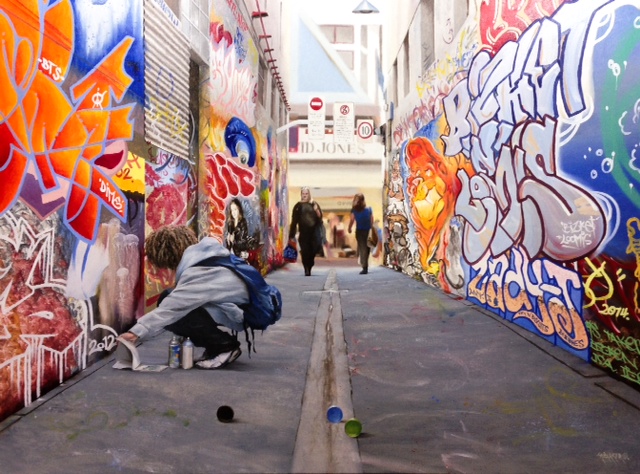 The upcoming exhibition at REDSEA Gallery is titled ’Street Front’s and Back Alley’s, Brisbane to Melbourne’.  What can guests expect from this exhibition?

The show at REDSEA Gallery is a collection of paintings and sketch work I have done from recognisable areas of Brisbane and Melbourne inner-cities.  The works focus on lots of colour and movement, to capture the vibrancy of these two cities.

Your work is very focussed on portraying street art.  Where did your fascination with street art start, and what do you find so interesting about it?

I have painted and drawn throughout my life and always saw earlier references to street art when I was a child in Sydney but started really following it back in high school.

I find the more people in the street art community I meet, the more I find innovative concepts and uses of materials to create amazing artwork of all types.  It is awesome to watch some of the things people come up with.

I really like the way it has and is always evolving and giving people the opportunity to have a public voice.  Although I do a bit of street art-orientated work as research, this area of my work in this show is fine art and uses traditional techniques and mediums to record the street art aspect of the cities. 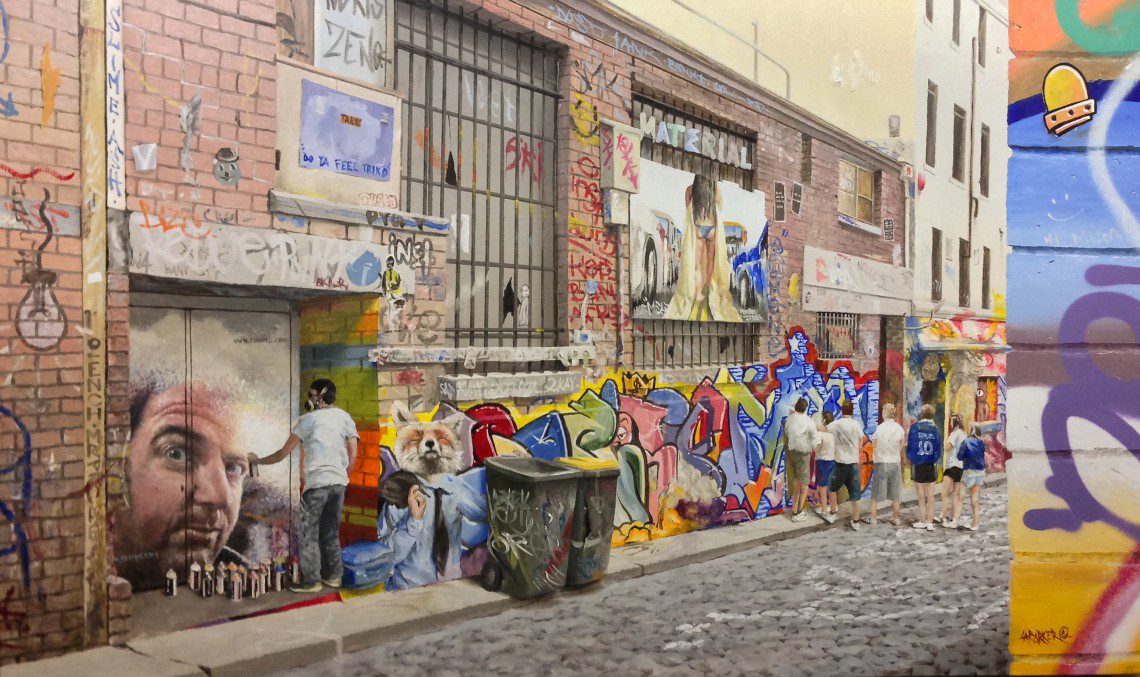 Like you, we are excited about the new notion of people coming together to appreciate street art.  Do you think that this notion is something that has existed before overseas, and is just new to us here in Australia?

Street art, derived from earlier Graffiti in its original beginnings in America and the United Kingdom and has become a new genre in its own right.  All over the world, street art and graffiti are finding new fame and acceptance with the community and like many other countries, Australia has included and accepted it for some time in our cities.

The styles and techniques vary from place to place, but it is a universal movement the world over, with people realising that it is so much more than just ‘marking other peoples property in the night – so much more than that blanket label that it carried for far too long. With the assistance of social media, it is now a colourful and loud voice in a global society.

Can you see any difference in the street art in Australia’s capital cities?  If so, what kind?

Street art on an individual scale is as different as people’s signatures when you study it up close.  It is like the visual version of listening to a crowd of people all at once.  When you get closer and focus on individual artistic expressions, there are many differences in every piece of work, which as a group, make an extremely vibrant collection of statements and creative areas to visit.

The difference from city to city is more about authorities’ tolerance and preparedness to work with their people and allow them to have this communal voice, rather than oppressive silence based on personal ideals.  This difference is greater in some states and cities than others.

How does the street art in Australia compare to the rest of the world?

Like many places in the world, Australia is following traditional patterns and trends in street art.  With out own statements to make and individuality in what we use in the environment around us, with the aid of various social media to stay in close contact with the world, Australia has a unique, interesting and engaging branch of artistic expression to add to this community.

We are fast becoming a formidable voice, clearly heard by the rest of the world.